Shoshanna Shapiro is one of the protagonists of HBO's Girls. She is portrayed by actress Zosia Mamet.

Shoshanna is the only child of Melvin and Melanie Shapiro (both are called "Mel"), who divorced sometime when Shoshanna was little. Shoshanna has an older cousin named Jessa. When Shoshanna was in High School, she worked as a camp counselor during the summer. She also had a friend named Kelly who was killed in a car accident. At the start of the series, Shoshanna is in her junior year at NYU, majoring in business.

In the Pilot , Shoshanna allows Jessa to move in with her. Shoshanna joins the girls on a trip to a women's clinic in Vagina Panic, where Jessa is scheduled to get an abortion, and Hannah an STD test. Before arriving, she stopped for snacks, assuming there would be a long wait. While Hannah gets her test, Shosh reveals to Marnie that she's never actually had sex and is, by definition, a virgin.

In the following episode, Hannah goes to Shosh's apartment, where she reveals that she has HPV. In turn, Shoshanna reveals she is a virgin. She also notes that Jessa has HPV as well, and quotes that "all adventurous women do."

In Hannah's Diary, Shoshanna runs into an old friend from camp, Matt, and they decide to hang out later. While watching a movie at her apartment, he rests his injured leg on her. She notices his boner, but won't touch it until they've kissed. They move to the bedroom, where Shoshanna reveals she is a virgin while he is performing oral sex on her. He stops, and claims he doesn't have sex with virgins, and leaves. Later, she attends Ray and Charlie's band performance with the other girls.

In Hard Being Easy, Shoshanna accidentally spys on Jessa having sex with an old fling.

In Welcome to Bushwick a.k.a the Crackcident, Shoshanna attends the Manhattan party, and is relieved when the other girls arrive. However, she accidentally smokes crack. Jessa assigns Ray to look after her, but she flees. Thinking he is trying to rape her, she uses self defense on him and hurts him. In an apology, she massages his groin, in a way she claims is non-sexual.

In the season finale, Shoshanna is upset to learn that Jessa's surprise party is actually a wedding, which she wore white to. While angry, Ray approaches her and admits his attraction to her. The two go home together, and Shoshanna finally loses her virginity.

At the start of the season, Shoshanna is seen blessing her home with sage, and wishes Ray's life to ruin. At

Hannah and Elijah's housewarming party, she attempts to avoid Ray. However, he meets her alone while she tries to retrieve her purse. Despite her former intentions, the two begin their fling again and make out.

Shoshanna and Ray are seen in bed together in I Get Ideas,, and they try to console Marnie after a failed job interview.

In It's a Shame About Ray, Shoshanna attends Hannah's celebration dinner with Ray, and they have sex before. At the dinner, Shoshanna is shocked to realize that Ray is actually living with her. After leaving, the two have a brief argument, and then admit their love for each other.

In It's Back, Shoshanna is concerned with Jessa's abrupt leaving. While at the park with Marnie and Ray, she tells Marnie about Charlie's new successful app, and Marnie leaves. As she and Ray continue walking, they meet a friend of Shosh's, Radhika, who invites them to her party. Ray decides not to go, but Shoshanna does. However, at the party, she decides she isn't having that much fun, and leaves. On her way out, she flirts with the doorman, and the two have sex in a closet.

In On All Fours, Shoshanna is clearly feeling guilty about cheating on Ray. At Charlie's app party, she tries to tell Ray about her cheating, but says the two only held hands. Ray laughs and forgives her.

In the season finale, Ray's lack of ambition begins to wear on her. She expresses this, and he goes out and gets a promotion at Grumpy's. However, he and Shoshanna still break up. Later that night, Shoshanna goes to a random bar and makes out with a guy she meets.

In Females Only , Shoshanna is on her final year of college and is enjoying a "year of freedom" where she varies between academic studies and fun.

She joins Adam and Hannah in a road trip to retrieve Jessa from rehab in Truth or Dare. While staying in a motel, Shoshanna claims that Jessa is going to be fine and doesn't have any serious problems much to Hannah's dismay.

In She Said Ok, Shoshanna mentions to Hannah, Marnie, and Jessa how strange it is that they haven't accomplished a lot despite being out of college for four years. She later runs into Ray at Hannah's birthday party. As they attempt conversation, Ray expresses that he wants to cut ties all together between the two of them.

In Dead Inside, Shoshanna talks with Jessa about death, who reveals she once had a friend die. Shoshanna encourages her to visit her friend's grave. Later, she becomes annoyed with Jessa while she tries to study.

In Free Snacks, Shoshanna is seen trying to spy on Ray as he's playing basketball. She later tells Jessa about how Time Out New York did a piece on his coffee shop. Shoshanna decides that she now wants to be in a committed relationship, and settles on Parker, a cute guy she once called "so dumb that he couldn't find the library." But halfway through sex with Parker, Shoshanna realizes that they just aren't meant for each other.

When Shoshanna, Marnie, Hannah, and Jessa all go away for the weekend in Beach House, she ends up drunkenly telling off her friends. Like that she felt like Hannah is a complete narcissist. But all the girls seem to make-up by the end of the episode.

Shoshanna attends a small get-together celebrating Adam's role in a Broadway play in Incidentals. Like her friends, Shoshanna expresses concern to Hannah that Adam is going to change.

In Role-Play, Shoshanna becomes worried about Jessa's drug habits and relapse. She tracks down Dottie, the daughter of Jessa's main negative influence, Jasper. She forces a dinner between the four of them, in which Dottie and Jasper reconnect, and he leaves Jessa and the drugs behind.

In the third season finale, Shoshanna learns that she will not be graduating after all because she failed glaciology. Then, Marnie shows up to make matters worse, and reveals she slept with Ray multiple times. Shoshanna pounces on her, and screams her hatred for Marnie. At the opening of Major Barbara, Shoshanna confronts Ray during intermission and confesses that she wants him back. However, he rejects her.

In the premiere of season four, Shoshanna and her parents retrieve her diploma after she graduates late. Her parents fight, and she explains her annoyance with them at Desi and Marnie's jazz brunch.

In Triggering, Shoshanna has her first job interview which appears to be successful at first. However, she doesn't get the job when she admits that she isn't really interested in the job and just wanted to practice interviewing for ones she actually wants.

In Cubbies, Shoshanna has another unsuccessful interview, in which she then asks whats wrong with her. After the interviewer critiques her, she leaves. She meets Jessa and Marnie at a bar, where she converses about her bad luck with finding a job, and complains about how bad the real world actually is. She then hijacks Ray's shopping trip and takes him to an "appropriate" store instead of his usual warehouse. At the store, she acknowledges that she did really love him, and she would like to show it by being his friend. The two then agree that his new shirt is awful.

She's the first one to visit Hannah when she finds out about Adam's new girlfriend Mimi-Rose in Sit- In, and helps Hannah look up Mimi-Rose on the internet.

While being interviewed for another potential job by Scott, the owner of his own soup company, in Close Up. Shoshanna doesn't get the job but accepts Scott's invitation to dinner. She later supports Ray's decision to run for public office.

Shoshanna ask Jessa for advice while preparing for date with Scott in Tad & Loreen & Avi & Shanaz. Despite a hilariously bad attempt to seduce him, Scott finds her hilarious.

During Ray's campaign party in Daddy Issues, Shoshanna is seen running the event and making sure it goes smoothly.

In Home Birth, Shoshanna attends another job interview and does well enough to get the job. However, she finds out that it will involve living in Japan for several months. Because her boyfriend doesn't want her to move, she considers declining, but after having a conversation with Hermie, Ray's boss, who convinces her to go her own way and pursue her own career. She ultimately takes the job. 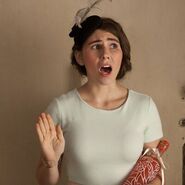