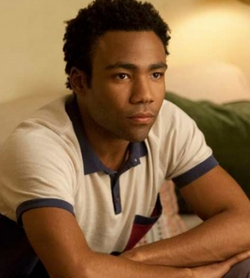 Sandy is shown to be casually dating Hannah in the premiere episode. He lends her his copy of “The Fountainhead”, and they have sex in his apartment. He's later visited by her at his place, and he let's her spend the night.

While making out with Hannah in "I Get Ideas", Sandy gives her bad feedback on an essay she wrote and didn't want to talk about it because he was afraid of how she would react. He then get's offended over how Hannah views his political beliefs and minorities in general. Sandy accuses her of fetishizing him because he's black, and they break up. He then rejects Hannah's to have sex one last time before she leaves.

- The character of Sandy was written specifically for Donald Glover by Lena Dunham after criticism for the show's cast in the first season being predominantly white.

- While Sandy himself is a Republican, he claims neither of his parent's are.

Retrieved from "https://girls.fandom.com/wiki/Sandy?oldid=6584"
Community content is available under CC-BY-SA unless otherwise noted.