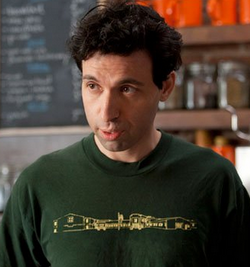 Ray Ploshansky is a main character on Girls. He's played by Alex Karpovsky.

To start out, Ray is introduced in the Pilot as Charlie's best friend. He used to work on a Latin studies degree, but dropped out with $50,000 in student loan debts. He manages a coffee shop, where he later gives Hannah a job. Ray is very protective of Charlie, and initially refuses to help Marnie get back together with him. He helps take care of Shoshanna after she accidentally smokes crack at a rave, and develops feelings for her. Shoshanna loses her virginity with Ray at the end of the first season finale.

In the season premiere, It's About Time, things seem to have gotten awkward between Ray and Shoshanna. But they manage to make up during Hannah and Elijah's housewarming party. They officially start dating, but it's revealed in It's A Shame About Ray that he's virtually homeless and sleeps in his car when he's not at Shoshanna's place. Despite this and their vast age difference (Ray is twelve years older than Shoshanna) they both say that they love eac other shortly afterwards. Their relationship though starts to wane when Shoshanna admits to that his lack of ambition is wearing on her. So he in the season finale, Ray informs his boss, Hermie, that he is going to quit and finish his Ph.D. in Latin Studies. But he decides not to when Hermie tells him he's planning to expand and wants Ray to run the new location. Despite this, Shoshanna later breaks-up with him because of his overwhelming negativity.

Ray resurfaces as the manager of a new coffee shop and has an unpleasant run in with Shoshanna at Hannah's birthday party, where he also gets into a scoff with Hannah's publisher. In the episode Only Child, Marnie comes to Ray's apartment in search of some brutal honesty where the two begin a fling. This fling continues into the episode, I Saw You, in which Hannah walks in on Ray and Marnie in the throes of their passion. Thus, revealing the two's secret affair.

Ray returns in Season 4 with an annoying issue of noisy traffic outside his apartment window after a new stoplight is installed. In the episode Female Author, Marnie once again seeks his advice on personal matters which leads to the re-kindling of their fling. After becoming overwhelming frustrated with the unjust system of his community board, Ray make the decision to run for the community board chairperson and wins in the Season 4 finale.