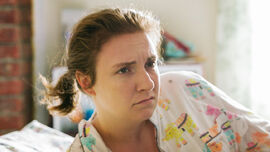 Latching is the tenth episode of the sixth season and series finale of Girls. It was written by Lena Dunham, Jenni Konner and Judd Apatow, and directed by Jenni Konner. The episode orginally aired on April 16, 2017.

Hannah embarks on a new chapter.

Marnie surprises Hannah at her home upstate. Admitting that she doesn’t have much going on in her life since her band dissolved, Marnie explains she’d like to help Hannah raise the baby. Hannah accepts the offer.

Five months have past and new mom Hannah takes baby Grover to the doctor for a checkup. He’s in great health, but Hannah’s concerned because Grover won’t breastfeed. She’s worried that it will interfere with their relationship. The doctor reassures her that everything is okay. As she and Marnie are driving home, Marnie states her case for breastfeeding. She claims people who were breastfed are more likely to be successful.

After numerous attempts to breastfeed Grover, Hannah gives up and gives him a bottle. Marnie tries to help her, but only causes Hannah to stress out more. Marnie tells Hannah about a jazz event in a nearby town that she wants to go to. Hannah immediately shoots the idea down because it would mean Marnie leaving her alone with the baby.

The next morning Hannah wakes up to discover Marnie called in reinforcements: Loreen. Hannah vents to Loreen about her experience as a mother thus far. She admits to being afraid she’ll raise Grover to have all her flaws. Loreen doles out some tough love, forcing Hannah to face the reality of her situation like an adult. Rather than take responsibility, Hannah storms out of the house.

Loreen walks in on Marnie having phone sex. Marnie is mortified when she joins Loreen downstairs. Loreen jokes about the whole situation, then recommends Marnie take some time to figure out what she wants from life.

As Hannah wanders her neighborhood, she runs into a teenage girl who’s clearly in distress. Hannah jumps to the conclusion the girl is danger. She soon finds out the girl ran away from home because she didn’t want to do her homework. Hannah gives her a stern lecture, but the girl isn’t receptive and runs away.

Hannah makes her way home. Going upstairs to tend to Grover, she finally gets him to latch. The two sit together, while Hannah sings softly to her son.

Retrieved from "https://girls.fandom.com/wiki/Latching?oldid=6154"
Community content is available under CC-BY-SA unless otherwise noted.