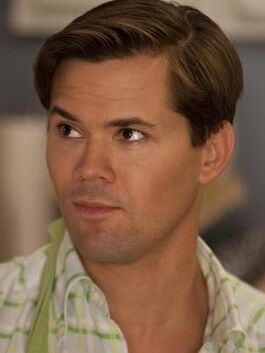 Elijah Krantz is a previously recurring, now main character in Girls. He is played by actor Andrew Rannells.

Not much is known of Elijah's earlier life, but he mentions he is of German descent. He was Hannah's boyfriend during their last two years at Oberlin College. He once hooked up with her best friend Marnie, and the two have had an uneasy relationship since. Though he did introduce Marnie to her future boyfriend Charlie. He also had a sexual relationship with a girl named Rachael Dubstick. Elijah presumably knew Jessa while at school as they're both seen in the flashback from Hard Being Easy. After he and Hannah broke up for unspecified reasons, Elijah realized he was gay and came out of the closet. It's mentioned that he once aspired to be a professional dancer.

Elijah sees Hannah for the first time since college in All Adventurous Women Do when Hannah thinks she contracted HPV from him. Though Elijah presumes that she heard about him moving in with his boyfriend Beau. Their meeting leads to a big fight when he tells Hannah that her "boyfriend" Adam lied about being tested for HPV as there's no way to detect the disease in men, and that her father is clearly gay.

Marnie spots Elijah dancing with Beau in Welcome to Bushwick a.k.a. The Crackcident, and begins a conversation with him. But when she complains about Hannah leaving her and how inconsiderate she is, Elijah defends Hannah and brings up the time him and Marnie made out in college to prove that Marnie isn't the perfect friend she makes herself out to be.

He goes to Jessa's surprise wedding in She Did, where he has a new boyfriend named George. Elijah reconciles with Hannah after admitting that he probably did give her HPV from another girl he slept with. He also agrees to become Hannah's new roommate since he's living in an awful apartment where every floor has to share a bathroom.

Elijah and Hannah are happily living together in It's About Time, and throw a party to celebrate. George gets drunk, so Elijah has Hannah take him home out of embarrassment. After everyone else leaves, he admits to Marnie that George pays for everything, and that he believes he might be bisexual. He and Marnie then have sex, but he stops when he thinks she rolls her eyes at him over losing his erection.

He confesses his dalliance with Marnie to George in I Get Ideas; causing George to break up with him. Elijah is also shown to not like Hannah's new guy Sandy because he's a republican. He has an awkward run-in with Marnie, where he tells her that they should never tell Hannah that they slept together.

In the episode Bad Friend, Elijah helps out with Hannah's new writing assignment by going to a club with her and snorting cocaine. He tells her that he had sex with Marnie while they're getting high in the bathroom, and Hannah later kicks him out for hurting her friendship with Marnie.

Elijah moves out of his and Hannah's apartment in It's a Shame About Ray, but is forced to leave some of his belongings since George told Hannah to keep any items he paid for. He gets offended when Hannah claims she "re-purposed" him in her life, and refuses to pay his share of the month's rent.

When Adam gets a part in the revival Major Barbara in Incidentals, Elijah joins Hannah in her work-paid hotel room to celebrate. He also asks if she's worried Adam will become a different person now that he's "made it."

He meets Patti Lupone in I Saw You while Hannah is conducting a meeting with her for work. Elijah later sees Marnie and Desi's open mic performance along with Hannah and Shoshanna, and is surprised by how good it goes.

Elijah attends the opening night of Adam's play in the season finale, where he tells Marnie he doesn't see her thing with Desi ending well for her. He's later seen moving himself into the main cast photo.

Elijah sees Pal during a jazz brunch performed by Marnie and Desi in Iowa. He later comforts a crying Marnie when the showcase goes bad, and tells her the music industry is not for sissy bitches.

In Close Up, he's shown to be back living in Hannah's old apartment in New York after her messy break up with Adam. He also inadvertently gives her the idea to become a teacher as her new career when he says she looks like a "School Marm".

After Hannah's dad admits that he's gay, she arranges for Elijah to talk to him in Daddy Issues. But he doesn't forget to remind Hannah that his earlier assumptions were correct.

- Hannah claims Elijah has a more feminine sounding voice in "All Adventurous Women Do", but a later flashback of the main and supporting characters in college depicts him with the same speaking style as present-day.