Adam Sackler is a young 20-something artist in New York City, and Hannah's main love interest. He is portrayed by Adam Driver.

Adam has one older sister named Caroline. He developed a problem with alcohol sometime as a teenager, but is now sober and attends AA meetings. Adam lives by himself, but his grandmother sends him $800 every month to help pay for rent. He met Hannah sometime before the beginning of the show, and they've been casually hooking up ever since.

Soon Adam moved into Hannah's apartment when Marnie moved out, but when his career became his priority their relationship swiftly ended.

Hannah goes to Adam's apartment in Pilot where he sympathizes with her being fired from her internship. He also has sex with her on the couch.

Adam tells Hannah that he's seeing other girls in Vagina Panic; making her worry she may have gotten an STI.

After Hannah sleeps over at his place in All Adventurous Women Do, he comforts her after she finds out she has HPV. He then becomes defensive though when she claims that she probably got the virus from him, and says he was just recently tested for it. This is later revealed to be a lie since Elijah points out to Hannah that there's no way to test men for HPV.

Adam sends Hannah a dick pic in Hannah's Diary, but immediately texts her that the picture was meant for someone else. In a failed attempt to make Adam jealous as retribution, Hannah tries sending him a nude pic then adds that it wasn't for him. Hannah later visits him at his apartment telling him she wants to find someone who wants a relationship with her. They then have sex.

Hannah visits Adam again in Hard Being Easy, and is surprised when he claims they're not together despite what happened in the previous episode.

While visiting her parent's in The Return, Hannah ends up calling Adam. He seems to be genuinely interested in what she's doing, and misses her.

Adam is seen for the first time outside of his apartment in Welcome to Bushwick a.k.a. The Crackcident when Hannah, Marnie, and Jessa all see him at a rave. He dances with Hannah, but they later get into a fight when Hannah finds out about him being in AA. She gives him an ultimatum over whether he wants to be her boyfriend and they leave together in a cab with Marnie.

Adam is now a growing presence in Hannah and Marnie's apartment in Weirdos Need Girlfriends Too. He convinces Hannah to go jogging with him, joking around to motivate her, buying her ice cream after she lies down and pulls her shoes off in protest. He also listens patiently when Marnie is obsessing over her ex-Charlie's trip to Rome with his new girlfriend Audrey, and chides Hannah for not taking Marnie's feelings more seriously. He later joins Hannah uninvited in the shower, and starts peeing on her. After having an existential tantrum about the play he's doing, he quits on the project two days before the show, leaving his friend and co-star Gavin in the lurch after Gavin spent thousands to mount the play. Eventually, after a highly off-putting exchange in which he and Hannah debate which is more important, integrity or getting a valuable writing credit, Adam agrees to do the play. But he tells Hannah this after rousting her out of bed in the middle of the night to see all the signs he's pasted to a neighborhood wall that read "SORRY" -- Adam's apology to a driver he'd yelled at earlier.

After helping Marnie move out in She Did, Adam volunteers to be Hannah's new roommate. He later accompany's her to Jessa's surprise wedding to Thomas-John and is very emotional during the ceremony. When Hannah tells him that Elijah is going to move in with her, Adam becomes upset since he wanted them to live together. They fight outside resulting in both their break-up, and Adam being hit by a car, though he's not seriously injured.

Adam is recovering from a broken leg in It's About Time, and has Hannah taking care of him in his apartment.

Hannah feels uneasy about Adam in I Get Ideas when he sends her a video of a song about their breakup. He later gets into her apartment, but get taken out when Hannah calls the police.

Ray goes to see Adam in Boys to get a book, and finds that he has taken a dog that was tied up outside. They end up travelling to Staten Island to return the stolen animal, but Adam gets upset over comments Ray makes about Hannah and leaves.

Adam attempts to call Hannah in It's Back, but she doesn't answer. He later attends an AA meeting where he admits how his breakup with Hannah was so difficult because he grow to love her over time. A women from AA later approaches him to set him up with her daughter, and Adam agrees. His blind date, Natalia, turns out to be very nice and seems to really like him.Now in a relationship with Natalia in On All Fours, Adam and her go to a friend's party when he runs into Hannah outside. He then starts drinking, assuring Natalia that he's fine, and takes her back to his apartment. They have a very bad sexual encounter.

Hannah video-chats Adam in Together during her mental breakdown, and he quickly recognizes that she is suffering from her OCD. He tells her he's going to her and runs to her apartment with the phone. He breaks down the door to find a distressed Hannah in her bedroom and they reconcile and kiss.

At the start of the third season, Adam and Hannah are now living together as a couple. They have an awkward run-in with at Ray's coffee shop. He later provides some advice to a heartbroken Marnie

He accompanies Hannah and Shoshanna on their drive to pick up Jessa from rehab in Truth or Dare since he is the only one old enough to rent a car.

His sister, Caroline, later comes to stay with them despite his protests in She Said OK and he brings her to Hannah's birthday party.

He tries to hang out with Hannah when she comes back from work in Free Snacks, but ends up letting her sleep on the couch.

Adam is cast in a Broadway production of George Bernard Shaw's Major Barbara in Incidentals. He brings Desi, a fellow actor he met during his audition, to a celebration Hannah's having in a fancy hotel room. Adam ends the night in the bathtub with Hannah talking about how excited he is and performing the monologue from his audition.

He meets Hannah's dying grandmother in the episode Flo and goes along with her mother Loreen's request to say that they're engaged.

By Role-Play, Adam's busy schedule starts taking a toll on his relationship with Hannah. He meets her at a bar and plays along with her scenario where she's a disgruntled hedge fund manager's wife. He later stops while they're having sex and announces that he's temporarily moving in with Ray in order to focus on his rehearsals.

During the finale, Hannah tells Adam about her acceptance into the Iowa Writer's program on his play's opening night. He later tells her that her news made him distracted and goes to the play's after-party by himself.

At the start of the season, Adam has become a full-time actor, having done an anti-depressant commercial. He and Hannah are still technically together, but decide to be open while she's away at school.

Jessa and Adam are shown hanging out in Female Author since Jessa is trying to remain sober. She ends up getting them both arrested when she rips up a ticket given for public urination in front of a cop and he intervenes. He later tells Jessa that he can't be around bad influences like her, but changes his mind when she admits she needs him to be her friend.

When Hannah returns to New York after leaving her writing program in Cubbies, she discovers Adam is now dating an artist named Mimi-Rose.

He formally breaks up with Hannah in Sit- In after she spends a majority of the episode holed up in the bedroom of their apartment.

Adam moves into Mimi-Rose's apartment in Close Up, but he starts to have issues with Mimi-Rose when she has an abortion without telling him beforehand, and for her careless attitude in general. While he does consider leaving, he decides to stay.

Hannah is confronted by an angry Adam in Ask Me My Name when she attends Mimi-Rose's art show with her date Fran. He's later made to share a cab with Mimi-Rose's ex Ace, who tells Adam that Mimi-Rose's behavior is very deliberate and that he will eventually get her back. Jessa also admits to him that she's romantically interested in Ace and the real reason she set him and Mimi-Rose up was to get him. He's later surprised when Hannah tells him she likes Mimi-Rose.

Mimi-Rose and Adam run into Ace and Jessa together in Daddy Issues, and Mimi-Rose invites them have dinner in their apartment. Once it becomes clear that Mimi-Rose has no regard for Adam's feelings as she openly admits to wanting Ace back, Jessa makes them both leave. He doesn't go to Ray's campaign party since he knows Hannah will be there and doesn't want to do something that he'll regret. When Caroline goes into labor early in the season finale, Adam tries to convince both her and Laird to go to the hospital. He ends up having to carry her to the emergency room along with Jessa, Laird, and Hannah. She gives birth to Jessa-Hannah Bluebell Poem Schlesinger-Sackler. Later while visiting his niece in the NICU with Hannah, Adam confesses that his relationship with Mimi-Rose was a mistake and that he wants to get back together. Hannah says she can't and leaves him there.

In the season premiere, Adam attends Marnie and Desi's wedding as a groomsmen. He also secretly kisses Jessa.

In Good Man, Adam and Jessa meet up at an AA meeting. Afterwards, Adam wants to talk about the kiss and Jessa refuses, telling him it will never happen. She finally concedes to allowing him to follow her around for the day, and they end up at Coney Island. Afterward, Adam tells Jessa he is going to kiss her goodbye, and again Jessa rebukes him. She finally agrees they can be together without touching. Inside the apartment the two sit in opposite sides of the sofa and masturbate. Jessa refuses to allow Adam to look at her, citing “the rules.” Adam says that the rules have changed, and they look at one another and each climax. 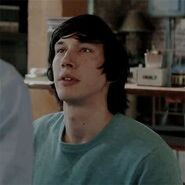 Add a photo to this gallery

Add a photo to this gallery
Retrieved from "https://girls.fandom.com/wiki/Adam_Sackler?oldid=6579"
Community content is available under CC-BY-SA unless otherwise noted.